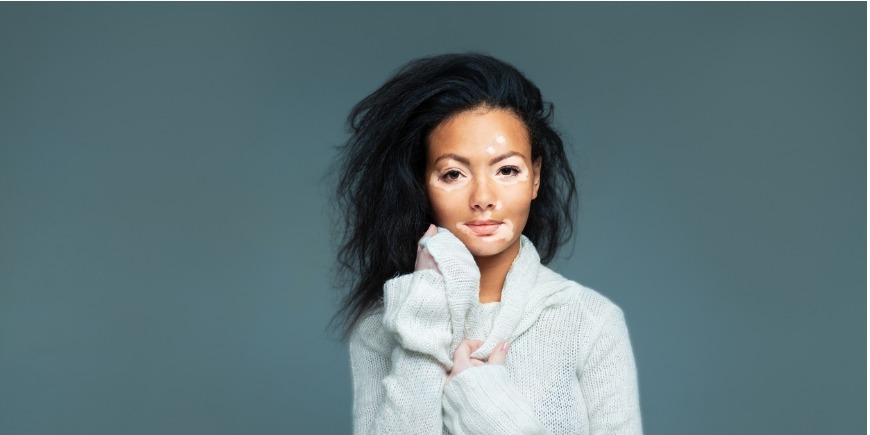 Vitiligo is a chronic skin condition characterized by the gradual loss of the skin’s natural pigment, causing it to discolor in blotches. This skin pigmentation disorder causes the skin to produce less melanin, which is the pigment responsible for skin, eye, and hair color. The location, rate of spread, and the onset of depigmentation are unpredictable. Unfortunately, there is no cure for vitiligo. Patients with vitiligo can lose pigment on any part of the body, hair, and inside of the mouth. Vitiligo can affect patients of all skin types, but it is more noticeable on darker skin.

Although there is no cure and no health risks associated with vitiligo — aside from the occasional itching — there are several treatment options available to help patients boost their confidence and self-esteem. At Gainesville Dermatology & Skin Surgery, our dermatologists work with you to determine the best course of treatment, keeping in mind your unique skin-related concerns and end goals.

Contact us to schedule a consultation to discuss vitiligo treatments or to learn more about the other skin conditions we treat.

Vitiligo happens after skin-pigment-producing cells, or melanocytes, die and stop producing melanin. The cause of this chronic skin condition remains mostly unknown. Many believe the cause to be an immune system disorder that attacks melanocytes in the skin. Some believe vitiligo is hereditary and responsive to trigger events, such as stress, severe sunburn, or skin trauma. Those with vitiligo might be at an increased risk of social or psychological stress, sunburn, eye problems, and hearing loss.

The primary symptom associated with vitiligo is light-colored or white patches on any area of the body, including around the eyes, in addition to the appearance of lumps and bumps. Small white spots on the skin first appear on an area of the body frequently exposed to the sun, such as the face, arms, or legs. The most common signs of vitiligo include the following.

Our team usually separates vitiligo into two types: segmental and nonsegmental, and three subtypes: localized, generalized, and universal. It’s difficult to predict how the skin condition will progress over time. Still, a dermatologist can help determine the type of vitiligo a patient has. The type and frequency of vitiligo treatment will largely depend on the type of vitiligo. Schedule an appointment with our dermatologists to learn more.

Nonsegmental vitiligo, also known as bilateral vitiligo, generalized vitiligo, and vitiligo vulgaris, is the most common type of vitiligo. It results in white patches that appear on both sides of a patient’s body. Spots usually start near the hands, around the eyes or mouth, on the feet, or other areas of the body that frequently rub together. Color loss begins in spurts but becomes more pronounced as time progresses.

Dermatologists use subtypes to determine the degree and severity of pigment loss on a patient’s body. Localized vitiligo occurs when one or two patches appear on limited areas of the body. Generalized vitiligo is the typical subtype where patients have scattered patches on their bodies. The rarest type is universal — this means that most pigment is gone.

Though there is no cure for vitiligo, there are numerous treatments available to help even out skin tone and restore skin color. Results vary from patient to patient, and the effectiveness is dependent on a patient’s unique condition. Successful treatment plans can be a single treatment or multiple treatments. It may require adjustment over time, depending on the type and severity of the skin condition.

Medications, such as creams that control inflammation and medicines that affect the immune system, might be prescribed. Likewise, therapies, including a combination of psoralen, light therapy, and depigmentation, are available. If therapy is not as effective, surgical options, such as skin grafting, blister grafting, and micro-pigmentation, might be used in conjunction with therapy to achieve the desired results. Contact Gainesville Dermatology & Skin Surgery to discuss the right treatment for you.